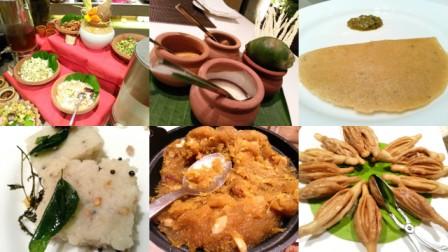 Trident BKC is back yet again with its ‘Rivaayat’ series, this time Dakshin after a successful Punjabi and Lucknowi.  Shri Bala a financial auditor by profession hails from Chennai has curated a menu spanning cuisines from southern states derived from her travels for work and a passion to cook. The Dakshin Rivaayat runs until 14th April in lines with the Navratri and hence a pure vegetarian menu.

As a south Indian and a South-travelled Indian I was familiar with flavours from the states however what intrigued me was a Burmese soup and Khowsuey on the menu! Food with a history and some legacy enhances the experiences and this Tamil- Burma connection goes back to the Chola times when Tamils migrated to Burma after it came in the Chola rule and in more modern history after the East Indian Company took over Burma in the early 19th century. All this while it was about Tamil influencing the Burmese food until the military coup of 1962; it left the Indian population in Burma with no land. The Tamilians who were natives of Burma for generations came back to Tamilnadu and in some years the Indian authorities set up the Burma Bazaar in northern Chennai which still exists today and the Burmese food on the menu is taken from the street of this bazaar in Parrys, Chennai.  Burmese food will never be the same again, will it!! Such is the power of history and legacy and so is the purpose of Rivaayat to revive and bring back!

The evening I dined, the, menu highlighted some street food of Chennai along with some classics from Tamilnadu and Kerala including the ubiquitous stew, rasam, green tomato sambar, rice cooked in coconut milk, crispy fried okra, snake gourd with peanuts, green brinjals in a gravy and more. In breads they had Malabar parathas, dosas, appams, rice and buttermilk steamed cakes. I also tried the Thakkali Adai, a tomato flavoured lentil dosa and sweeter version without the tomatoes but with jaggery and bananas.  The menu changes every session and one is likely to find food from Andhra and Karnataka in the mornings.  For those who want to look beyond idli, dosa and sambar 022, Trident BKC is the place to be.  Do not forget to start your meal with an appetizing Panakam made from ginger, lime and jaggery and end with root halwa ( in pic).