Never been to an Oktoberfest? While the world celebrated this 207 year old extravaganza  in its birthplace Munich until a couple of weeks back, the newly opened Gateway Taproom in BKC gives you an opportunity to enjoy the fest until  22nd October 2017.They call it ‘Pretty Much Munich’. 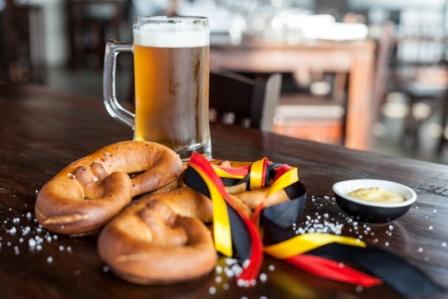 Oktoberfest was born in 1810 when Munich celebrated the Crown Prince’s wedding with a special beer and huge party that ran for 16 days. This has continued with more vigour and pomp ever since, over 6 million patrons attend with over 7.5 millions liters of beer is poured.

At the Gateway, the White Zen (Hefeweizen) and Doppelganger (Dunkelweizen) the mainstays of Gateway  along with Marzen the  Festbier and the Vienna lager a crisper variation to the festbier enthralled us on a bright afternoon.

The food was a surprise, pub-grub never gets so intricate and authentic here in the country.. the former was the parmesan puff which was top-notch and the latter the kaesesspaetzle a German staple of a indigenous ‘pasta’ and cheese which reminded me of my recent Stuttgart trip. As a vegetarian in Germany  you only get to eat Spaetzle and Kartoffel Salat ( potato salad) apart from the host of artisanal  breads and of course the Pretzel.

To more brewed times ahead, Prost!