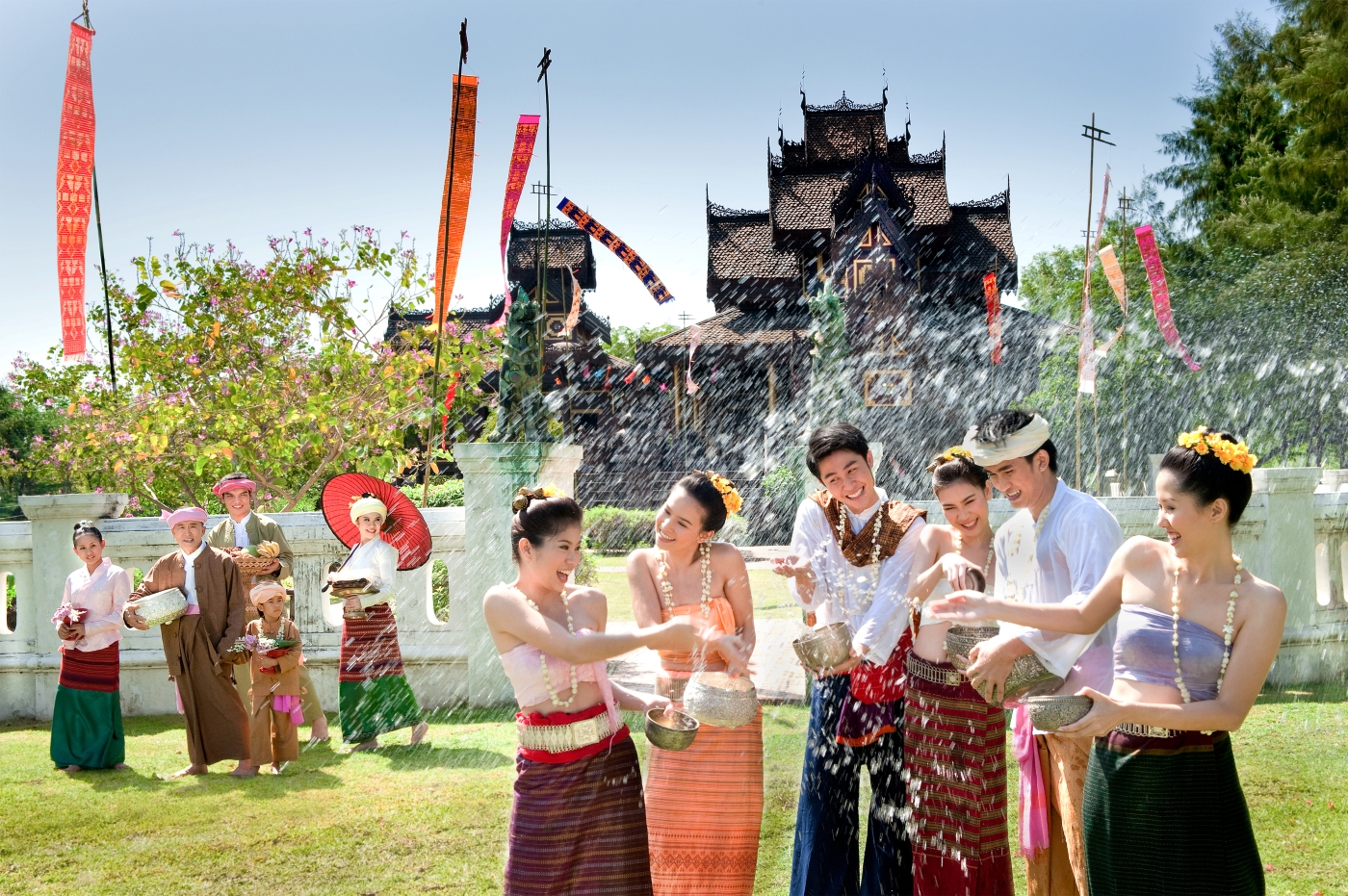 I was very elated to receive an invite to be part of  the Songkran revelry at San Qi the pan- Asian restaurant at the Four Seasons hotel Mumbai, moreover so because it was in the company of officials from the Tourism authority of Thailand and the Thai consulate led by the Consul general.  Where else could I find the privilege to understand  Thai culture and my beloved food so closely!

Songkran, the Thai New Year falls between 13-15th of April and the festivities begin a week in advance and continue till the 20th.  It brings the country together in a nationwide gala where every street is bedecked with water containers and guns; crowd revels in the festival just like Holi in India though the use of colours is minimal. The people in a ritual pour scented water on the hands of their elder’s, hoping for longevity, health and happiness.  Sethaphan Buddhani, director, Tourist authority of Thailand said, “We are delighted to bring the spirit of Songkran to Mumbai. India continues to be a huge market for Thailand with 1,049,856 travellers during 2013. Many of these are repeat visitors and we are keen to introduce the traveller to new experiences possible in the destination, such as our multitude of festivals, golf, rural tourism and cultural elements like Thai Kickboxing.”  Do you know of any festival complete without food… I am sure you don’t , neither do I!

So is this what you know about Thai Cuisine ?

Peanuts, Coconut milk, chillis, lemon grass and ginger  all put together and tossed with anything is Thai is the misconception many of us Indians have and a common man’s repertoire of Thai food is restricted to Thai curry and these days the commonly found Tom Yum soup , which mostly ends up to be a  broth overtly flavoured with ginger and lemon grass.  Perhaps it is the same phenomenon of Indian food being restricted to Chicken tikka, dal and roti for tourists.

So what is more to Thai food then?

Thailand is flanked by Burma in the North extending to the west, Malaysia in the south; Laos and Cambodia in the East, China and Vietnam do not share borders but are with 100 kms from the territory. It enjoys a tropical climate with a more temperate and cooler climate in the northern region. The combination of cultural influences permeating from the borders over centuries and the topography has resulted in 4 distinct regions and their cuisines. The traditional Thai meal consists of rice and every other dish is an accompaniment.

It is the heartland of Thailand and Bangkok the capital and the destination for Royal Thai cuisine. The central cuisine is a melting pot of cuisines adapted from other regions of Thailand and over years tweaked to suit the demand. This is the cuisine which uses a lot of Jasmine rice and some popular dishes include Pat Thai (fried noodles), the green curry and the Royal version of Som Tam (Raw papaya salad) with peanuts etc and is the most found version of Thai food in the west. It is sweet, sour and salty.

Also referred to as Lanna it draws a lot of influence from Burma. Sticky rice is preferred to Jasmine rice here and it is had in the form of rice balls and dipped in sauces. Considering the high altitude of the north, meat; pork and its sausages in particular are a staple here. The curries here are the mildest of the nation, more sour and salty than hot. Kaho Soi- A broth with egg noodles and meat and the traditional pork curry are popular dishes here.

Also called Isan, this region is least frequented by tourists. It comprises a lot of grilled meat, pork, beef and chicken and also fresh water fish. It is known for very spicy salads like the Som Tam and the Laap Kai with mince meat which originates from Laos. They also use a lot of pickled and cured food in their cooking.

It is the peninsular region with tourist favourites like Phuket. It enjoys a tropical climate which explains the heavy use of coconut, pineapple and tamarind. More than one third of the population is Muslim and hence there is a distinct difference between the cooking styles evolving from the fishing Muslim community on the coast and the Buddhists more inland. Southern food is the spiciest of all in Thailand. It draws influence from Malaysia, India, and Indonesia and are known for dishes like Cardamom flavoured Matsaman Curry, the yellow curry and Sa Te (Satay). Sato a pungent flat bean apart from Cashew is used in a lot of stir fries and curries.

How about vegetarian food?

It was a difficult proposition once but now major tourist destinations have understood the need to customize it for not only Indians but tourists from across the world that are not only adopting vegetarianism but also turning vegan. The Thai cuisines use a lot of Fish sauce ( Nam Pla) and shrimp paste as flavouring even in a completely vegetarian dish, for example the raw papaya salad. Baring popular locations the locals are yet to come to term with vegetarianism especially the Indian style where some of us may have additional dietary restrictions with garlic, onions, mushrooms etc, so ensure you request the chefs your preference and they will oblige.

Being a vegetarian at SanQi for Songkran!

Most chefs once upon a time did not like to move away from authenticity and especially if they had to do it over and over again. But with all the travelling happening and the world becoming a smaller place; businesses have realized the importance of localization. Chef Seefah Ketchaiyo the Thai chef who heads the SanQi kitchens is always happy to adapt and innovate for the herbivores. Now everybody knows what top billionaires of India eat!

The Yam pak kom thod grob (Tempura Style Spinach fritters with a piquant Tamarind sauce) was a good appetizer only to be followed by Yam kao neaw Thod (crispy sticky rice salad) which was bursting with Kaffir Lime leaf flavour , it was sweet, sour, salty and spicy could not ask for more.  For main course was Ma kuay muang tuun see aew kaw ( steamed jasmine rice served with grilled egg plant and fried tofu in a mild sweet and salty soy ginger sauce). The much awaited dessert  Koa neaw ma muang meaning sticky rice with alphonso mango with some salted coconut cream was really superb with every flavour standing out.

It was a lovely Saturday afternoon complete with rituals and culture. “Segments of the Indian market are culturally exposed and well-travelled. They are today looking for more immersive experiences. Loi Krathong – best recognized by its floating lanterns, is already popular amongst Indian travellers. I expect that Songkran will also be a big hit here. People who experience the Songkran Food Festival at the Four Seasons Mumbai are sure to plan a trip there for Songkran next year,” Mr Buddhani added.

SanQi is celebrating Songkran with a special menu from 8-15th April and yes, diners stand a chance to win a weekend getaway in Bangkok!!!

Happy Songkran … get wet, get wild, be blessed…and do not forget to eat well!

2 thoughts on “San Qi at Four Seasons, Mumbai soaks in the ‘Songkran’ fervour!”